Skip to content
You are here: Home » About The Club » BGGC History

The club was formed as the Bristol Gliding Club in 1938 by two enthusiastic ex-members of Cambridge University Gliding Club and members flew from Leighterton airfield, Gloucestershire, with two gliders and a tow car until the war put a stop to private flying in 1939. At that stage it had 30 members. 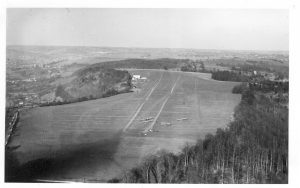 After the war a new set of enthusiasts revived the club, starting from scratch as little remained of the old club beyond about £70. They were fortunate to get the use of the disused RAF aerodrome at Lulsgate, near Bristol, and with a combination of enthusiasm and prudent finance were able to build up a respectable fleet of gliders and a thriving membership in a very few years. In this they were assisted both by the Kemsley Flying Trust, which gave low-interest short-term loans, and by a scheme for block membership for employees of Bristol Aeroplane Company.

For a few years the club ran an outpost for hill soaring at Roundway Hill, near Devizes, Wiltshire.

In 1954 it was announced that Bristol Airport was to move to Lulsgate, and the club had to look for a new site. Again they were fortunate in finding their present site at Nympsfield for sale, click on the image for an article from "The Aeroplane" in December 1954 describing how John Parry-Jones led the selection process. 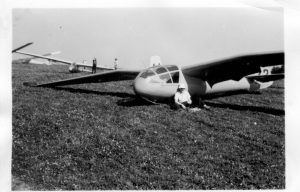 In the event they were only able to finance the purchase of the field, the erection of a hangar and the conversion of the barn to a clubhouse through a loan from the Kemsley Fund. The move was completed at Whitsun 1956, and in 2006 the club celebrated 50 years’ use of the Nympsfield site.

Conditions were rather primitive, with no mains electricity or water, but over the years the facilities were built up, and the loan was paid off by 1965. Development has continued steadily since then. A new hangar was built for 13 gliders on the south of the field in 1967. The field was extended in 1982, and a new hangar was built in 1983 on the north side for on-site maintenance and repairs and a new clubhouse was built in 1989.

Recognition of the new siting of the club led to a name change to Bristol and Gloucestershire Gliding Club in 1969.

Peter Scott, the naturalist, broadcaster and artist, joined the Club as soon as it moved to Nympsfield. After soloing in gliders, he quickly became involved in cross-country and competition flying. He gained publicity for the Club in 1957 by arranging a visit by Prince Philip on the 15thMay with a flight in his Eagle piloted by Peter Collier.

In the following year he arranged a live television broadcast from the Club on the 17 Aug during which a striking 10 launches were flown in 35 minutes with the aid of 4 aerotows provided by the Tiger Club. A newly developed portable TV camera was used by the BBC for the air to air shots. The BBC paid the Club 225 guineas for their co-operation in this event, 25 guineas of which was passed on to the Tiger Club. A further programme was recorded over several weekends in June 1959 and broadcast later in the year.The Club received £425 for this.

A much more detailed history  "Landmarks in the development of the Bristol (and Gloucestershire) Gliding Club"  is in development and is available to download below. The intent of  "Landmarks" is to describe how the Club came to be as it is, and who deserves the credit. Although at present it only goes as far as the 1990's the intention is to continue up to the present day. The author invites additions, comments and corrections and of course new photos and anecdotes!

The PDF files below can be viewed using Adobe Acrobat Reader ; Please note that these files are up to around 3 Mb.

The records of the club's gliders, private aircraft, trophy winners, officers and subscriptions have been collected by the history section in spreadsheets (You may require MS Excel or LibreOffice). Please contact the webmasters if you can fill any gaps